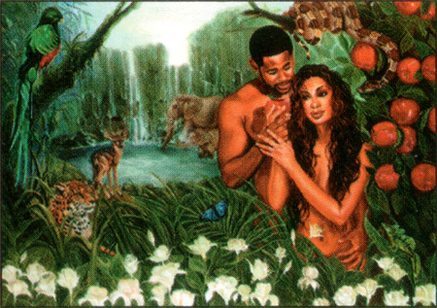 The Enuma Elish (also known as The Seven Tablets of Creation) is the Mesopotamian creation myth whose title is derived from the opening lines of the piece, “When on High”.

Question: Did Moshe/Moses write the Torah based on ancient Sumerian knowledge?

Note: As a moral Hebrew, I denounce Satan and do not agree with this writing of this spirit being innocent, I am blogging on the esoteric knowledge believed by illuminist and secret societies around the world who believe these to be truths regarding their god Ea/Lucifer/Satan. 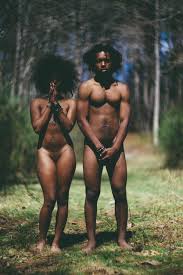 According to many Illumunist: Prince Ea was a very important figure in the ancient world, as you have learned from the Gods of Eden page. Ea was the one who suggested that the Neanderthals be used as a base for a new creation. This creation would take over their work load. Ea basically said,”all we (Elohim) have to do is upgrade them using our own genes.” (Genesis 1:27)

Ea was a genetic engineer. Within ancient Sumerian writings, he is given credit for many other accomplishments other than engineering Homo sapiens. It is said that Ea drained marshes by the Persian Gulf and replaced them with fertile agricultural land. Ea also supervised the building of dams and dikes.

Ea didn’t engineer Homo sapiens without trial and error though. His character was flawed as ancient Sumerian writings reflect. He was somewhat careless at times.

Goodhearted is what Ea was, at least in regard to his creation. Ea spoke before the councils of the gods on behalf of the new EArth race. Ea was against the cruelties the other gods were imposing on humans. Ea’s wishes were overruled by the other faction. Ea did not intend for the human race to be treated harshly.

The rebellious god Ea formed an organization called, “The Brotherhood of the Serpent/Snake.” Ancient Egyptian writings tell us its ORIGINAL purpose was to educate the human race in TRUTH and to liberate the human race from its bondage, the same bondage portrayed within the movie, “The Matrix” , where “AI”/Satan is the controller of the human race.

No other animal within ancient civilizations was more prominent or as important… than the SNAKE. The snake is just one among many other symbols of the Brotherhood. The snake is also a symbol used within Freemasonry, the Devils religion. It 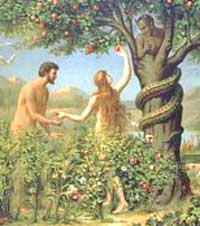 is important for me to say again, not all Masons worship Satan, only the top 5% do.

Ea and his father Anu were said to of possessed profound ethical and spiritual knowledge. This is the same knowledge that was later symbolized as trees in the biblical Adam and Eve story. The biblical tree symbol (left) came from pre-Biblical Mesopotamian works, such as one showing a snake wrapped around the trunk of a tree, identical to later portrayals of the snake in Eden. The picture on the left depicts the biblical Adam & Eve in Eden with the Serpent (Ea) wrapped around the tree.

From the tree in the Mesopotamian depiction hang two pieces of fruit. To the right of the tree is the half-moon symbol of Ea; to the left is the planet symbol of Anu. What this drawing indicates is that both Ea and his father Anu were associated with the snake and its teachings.

The ones who wanted to control the human race didn’t want this knowledge to be known to humans, so it became THE FORBIDDEN KNOWLEDGE. The evil faction overthrew Ea. The Brotherhood of the Serpent/Snake was then turned against him. They taught falsehoods about Ea. Because of all the LIES that were taught, many people today think the Serpent in Eden is Satan (a liar and evil doer) and not Ea (a freedom fighter).

Ancient Mesopotamian, Egyptian, and biblical texts relate that the “snake” or Prince Ea was quickly defeated by other factions.

Ea’s title was no longer “Prince of EArth.” It changed to “Prince of Darkness.” Other horrible names were attached to him as 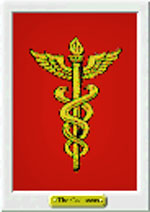 This of course is where Satan fooled everybody into thinking he was God and God was Satan. (God = Satan, Satan = God)

In modern day, Ea and his father Anu are represented within the seal of the American Medical Association (AMA) (left) as two snakes coiling up a rod. The AMA’s current seal(1991;below right) features a snake with no fangs. Brotherhood teachings included physical healing through spiritual means. 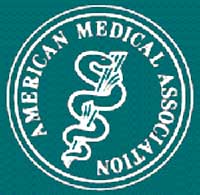 The Brotherhood of the Serpent/Snake has been the worlds most effect tool for keeping the human race spiritually ignorant. Ea wound up giving his enemies a powerful tool of spiritual repression. EArth became a place where spiritual beings can be trapped, enslaved, and made to suffer.

The Brotherhood has been with the human race all through history. In Ancient Egypt it was known as “The Mystery Schools.” This secret society Brotherhood also includes Freemasonry.

Ran by evil The Brotherhood continues to dumb down the human race via repetitive mind control tactics, in an effort to forever control the human race. And we must all work towards putting an END TO IT!

Reptilian Brotherhood of the Snake